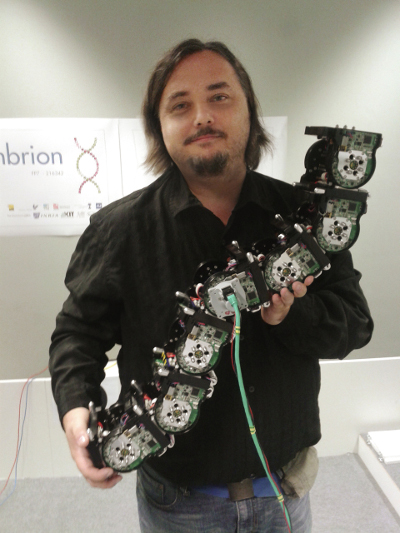 Ecosystems are currently breaking down world-wide, especially insect species are dramatically disappearing. In order to protect our society, which depends on the ecosystems it is a part of, we have to prevent further decline of bio-diversity. However, damages are already present and crucial „key-stone species“ are threatened. We studied the collective swarm-behavior of two highly threatened animal groups (honeybees and fish) and, as a proof-of-principle demonstration, we have designed two robot species that can infiltrate those ecosystems and even coordinate these very different animals with respect to each other. This way we have created, for the first time in history, a novel ecological link between them by embedding autonomous robots in a small living ecosystem. This was the first time that such an ecological link was mediated by autonomous robots, showing that this is a viable option to externally stabilize fragile, or even already broken, ecosystems.

Thomas Schmickl is full professor at the Department of Zoology at the Karl-Franzens-University, Graz, Austria, where he is also supervising the Artificial Life Lab, which he founded in 2007, after returning from a HHMI visiting professorship in the USA. In 2012, he was appointed the Basler Chair of Excellence at the East Tennessee State University (ETSU), Johnson City, TN, USA.
Besides his research activities in the fields of Zoology, Biological/Ecological Modeling, Bio-inspired Robotics (Swarm Robotics, Modular Robotics, Neural Networks, Artificial Hormone Systems, Evolutionary Robotics) he teaches also ecological modeling and multi-agent simulations at the Department of Environmental System Sciences at the URBI faculty at Karl-Franzens-University Graz. He also taught as a lecturer in multi-agent modeling at the course of study “Industrial Simulation” at the University of Applied Sciences in St. Pölten, Austria for more than 10 years.
He was/is partner in the international EU-funded projects I-SWARM, SYMBRION, REPLICATOR, FloraRobotica and he was/is leading scientist and consortium coordinator of the EU grants CoCoRo, ASSISIbf and subCULTron and HIVEOPOLIS. These projects all aimed at improving the current state-of-the-art in robotics to let them be more similar to animals (or other natural organisms) in order to be adaptive, resilient and flexible. In his recent projects, animals and plants became even parts of the robotic systems, in order to form bio-hybrid societies of natural organisms and robotic agents to achieve a novel, more powerful but also more sustainable symbiosis.
Recently, he founded the COLIBRI initiative (Complexity of Life in Basic Research and Innovation) at the University of Graz, which is a network of approx. 20 full professors who research complexity sciences and join forces across various disciplines (Biology, Economics, Sociology, Psychology, Mathematics, Chemistry, etc.). He extended his research interest into socio-economic multi-agent modeling through the work in this initiative.
Artificial Life lab: http://zool33.uni-graz.at/artlife/ COLIBRI: https://colibri.uni-graz.at/en/ University of Graz: https://www.uni-graz.at/en/

In recent years robotics and artificial intelligence has gained a lot of interest also in the area of production and manufacturing. While systems for a long time have been used as tools to implement classical AI approaches in the area of object recognition,
environment representation, path and motion planning etc., researchers now begin to understand that the robot itself is part of the question and has to be taken into account when thinking about AI. Robotics and AI in production and manufacturing scenarios ultimately requires for intelligent systems that come with a degree of
structural (kinematic) complexity that allows them to perform on the same level as their human counterparts. This talk will survey the state of the art in robotics and outline ways to tackle the question of AI in the light of the systems as an integral part of the approach. Future milestones and key achievements will be discussed and a
scenario will be presented on how to integrate modern robotic systems – that provide the above mentioned AI features and electromechanical complexity – into modern production and manufacturing scenarios. Advantages and Bottleneck’s of today’s
technology will be discussed and a request is made to carefully integrate these so called disruptive technologies in a human centered way.

Frank Kirchner is Executive Director DFKI Bremen and in charge of the research department „Robotics Innovation Center“ with more than 100 employees. Founded in 2006 as a DFKI laboratory in Bremen, the institute is building upon the fundamental research of the Robotics Research Group led by Kirchner at the University of Bremen. Since 2002, the university professor has held the chair for robotics in the faculty of
mathematics and computer science. Kirchner studied and obtained his doctorate at the University of Bonn and worked as a senior researcher at the Gesellschaft für Mathematik und Datenverarbeitung (GMD) in Sankt Augustin and at the Faculty of Electrical Engineering at Northeastern University in Boston (USA). In 2013, under Kirchner’s leadership and following the model of the DFKI, the Brazilian government founded the “Brazilian Institute of Robotics” in Salvador da Bahia, where he was the Scientific Director during the development phase. There he was awarded an honorary doctorate in 2017 for his achievements in the field of robotics and artificial intelligence.
Frank Kirchner is one of the leading experts in the field of biologically inspired behavior and motion sequences of highly redundant, multifunctional robot systems. In addition, he supervises a variety of doctoral theses, is a regular reviewer for a number of international scientific journals and conferences and is the author of more than 350 publications in the field of robotics and AI. In 2015, Frank Kirchner was elected and
accepted as a member of the Berlin Brandenburg Academy of Sciences and Humanities (BBAW).